History of Astrology: How It All Began 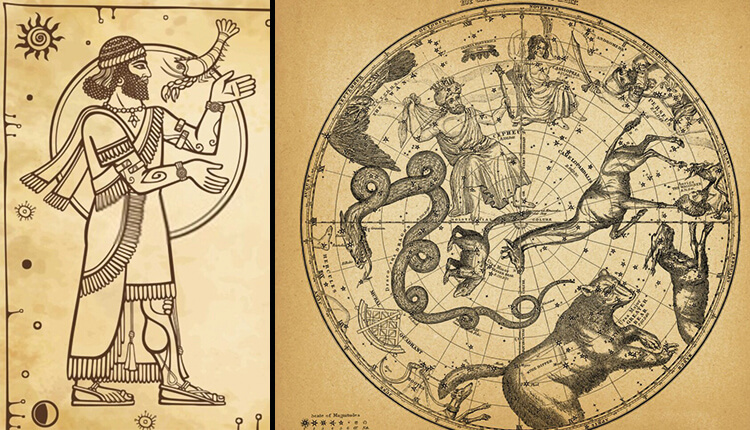 Explorers and navigators traveling into the unknown would look up towards the planets above searching for constellations and patterns to use as a compass.
Our early family members from all different regions, cultures, and tribal backgrounds collectively would curiously study the galaxies above us as a guide to mystically direct us through life.
Literally, the idea of “as above, so below” or “as is the micro, is the macro” are philosophies that have held truth longer than we can all even recall.
In fact, this mystical study of the stars, planets, and all other cosmos has been around so long that we can’t even pinpoint who was the “founder.”
Let’s take a look at who from around the world has also held this science in high regard…
Most ancient cultures believed that the teachings of the universe were extremely sacred and should be passed down by storytelling and word of mouth to those that could be trusted.
Rather than writing and sharing this power with everyone, it should be protected.
Most of the evidence of early astrology and it’s permanency can be found in architecture all over the world, leaving us all tidbits of reassurance that astrology and related studies haven’t steered us in the wrong direction for as long as we can remember!

Some of the most famous ancient architectural designs are the ancient pyramids in Egypt.

People travel from all over the world to not only witness, but also feel the wondrous energy that flows from (and all-around) these ancient buildings.
Not only did they hold the gold and treasures from pharaohs and queens, but there is a magic that is drawn from the macrocosm above down into these “otherworldly” designs.
The ancient pyramids of Egypt were built to be directed towards the North Pole of the sky to serve more than one purpose, one being as a burial site and the other as astrological calculators.
A parallel belief between many ancient cultures is that there are certain energies that act as “gateways to the Divine.”
This is also said to be true about sacred geometry, in which astrology crosses over into time and time again!
The Egyptians would assign certain characteristics and beliefs (and could predict a certain fate over a particular situation or individual) depending on the placement of those cosmic bodies at that person or situation’s conception.
Sounds a bit like a birth chart, right?
I’ve always said that the birth chart is your very own cosmic fingerprint.
Your unique birth chart is a galactic snapshot, outlining all potentials, purpose, challenges, and areas of opportunities here in this lifetime!
The ancient Egyptians trusted these sacred understandings so much that they would determine their agriculture around astrology, providing food successfully for the masses by planting crops at correctly predicted times.
Archeologists have found a “Calendar of Favorable and Unfavorable Days” that was used by Egyptian pharaohs to represent predictions for people that were born under certain dates.
That sounds awfully a lot like a horoscope, right?
In fact, the Egyptians had their own hieroglyphs with dates that correlate to each zodiac sign.
The Egyptians weren’t the only ancient civilization that believed in the strength of predictability through the stars…

The Mayan culture is known for its timely predictions, the infamous Mayan calendar, and it’s overall sophistication as a society.
They incorporated their astrologically denominated calendar into their daily lives from predicting the planting of their crops like the Egyptians to actually following its timing for daily rituals.
It’s said that almost every element of their life was predicted through their astrological system.
One of the most interesting architectural systems that the Mayans left behind was the El Caracol, which can be observed now in the Caracol observatory in the ancient Mayan city of Mexico.
This building incorporates a spiral staircase that leads to different windows as you ascend further and further upward.
Each of the windows corresponds to a different planetary position and would be observed at various times throughout the year.
Thankfully, now we have telescopes and advanced technology to literally study the stars.
Astrology was coveted information that only the royals had access to understanding in ancient times.
But we now thrive in the information age where we can share this higher knowledge among everyone, truly empowering the collective overall, starting at an individual level.

We’ve covered areas of Africa and the Americas that have relied on Astrology. And we can even find evidence in the European regions within the ancient Celtic culture.
Again, this information was always guarded with secrecy to protect its power from getting into the wrong hands!
For this reason, most of the evidence that we can find (even from the Celts) is in an architectural form, rather than books left behind for us to indulge in.
In their traditional preference, the Druids did not leave behind their techniques. Instead, they left evidence through glyphs (similar to hieroglyphs in Egypt).
According to the glyphs, they used a 13-month system that was actually lunar-based rather than solar-based (similar to the Chinese approach).
It is said that the solar-based calendar systems simplify to 12 months in order to “bring the knowledge back down” to this earthly realm in a way that we can all use it.
One thing we know for sure about the moon is that there is a very mystical undertone with all of its cycles, being felt more than sometimes being understood.
In contrast, solar energy can be seen, understood, and logically applied. Sometimes, these energies are explained as feminine (lunar) and masculine (solar).

The celts would divide their calendar year based on these 13 months with the new year starting just 3 days after the winter solstice which is far more aligned with the cycles of nature than our current Gregorian calendar.
It’s yet to be determined exactly how the Celts adjusted their 13-month system to merge it with reality on a solar level. But the evidence of astrological studies still remains permanent in the glyphs that you can see below…

This approach is similar to the astrological Chinese system, but a little different.
There are approximately 12.3 lunations per solar year but it’s difficult for us to study how each ancient culture handled this decimal.
The Chinese decided to add a “leap month” every 3 years that’s determined by traditional rotation rather than skipping over the discrepancy altogether.
This was just one way this ancient culture was able to “bring down” the lunar cycle back to earth in a tangible way for us to understand and implement.
The Chinese have always depended on ancient awareness and universal laws to govern how they move through life, developing their own horoscopes, zodiac signs, and all the like.
Although it might be important to you to know your own individual ancestral background to dive into the way that your family may have learned this sacred science, there’s one universal fact:
Astrology has been around for thousands and thousands of years, truly being a foundation for us as the human race to stand on.
Astrology as a whole helps us to understand the universal laws that govern our realm, the energies that surround us, and gives us guidance while trying to navigate this complex world.
On an individual level, astrology has been used and interpreted in many forms, still pointing and urging us to understand our unique sign charted by the day we were born.
Each ancient civilization has its own category, its own interpretation, and its own dated outlines.

The idea that remains the same is that certain people born under certain dates and times have already been given a “blueprint” of sorts to understand their life purpose, unique talents, specific challenges, highest potentials, and biggest hurdles, all by simply looking up to observe the stars.

How To Practice and Develop Your Telepathic Abilities

Learn how to commune with your spirit guides

How To Practice and Develop Your Telepathic…

How to Discern the Difference between Bad…

Discover how you can work with energy to…

Learn how to commune with your spirit guides

Learn about the origins of astrology and how…

The Surprising Secrets Behind…